What can a film possibly tell us about its director? Sometimes we need to look very closely to find traces of a persona in a work of art. Other times, it tells us everything right away. Released in 1983, Nostalghia lets us directly into the mind of a great Russian film director – Andrei Tarkovsky.

Nostalghia is probably the most personal story for Tarkovsky. The director himself did not expect that the movie would convey his own state of mind in such detail. In Sculpting in Time, his book about filmmaking, he writes: "How could I have imagined as I was making Nostalghia that the stifling sense of longing that fills the screen space of that film was to become my lot for the rest of my life; that from now until the end of my days I would bear the painful malady within myself?"

In the early 1980s, Tarkovsky was invited to shoot a movie in Italy. He never returned home. He was not a Soviet dissident: the authorities did not harass him; though his decision to leave Russia had political reasons. It was very difficult for him, but it was probably the only possible choice for a person of his mindset living in the Soviet era. This partly forced immigration marked the beginning of his personal crisis which was fully reflected in the movie. Nostalghia was written together with Tonino Guerra, Italian screenwriter, and it was the first film Tarkovsky shot outside the Soviet Union. During his work on Nostalghia, he writes in his diary: "A bad day. Terrible thoughts. I'm frightened. I'm lost! I cannot live in Russia, nor can I live here." The very same theme of helplessness and rootlessness is explored in the movie.

The movie follows a Russian poet — Andrei Gorchakov (Oleg Yankovskiy) — who comes to Italy to write a book about an obscure composer named Pavel Sosnovsky that has been visiting those places. And just like Tarkovsky himself, Gorchakov is going through an emotional struggle of being far from his motherland. He does not just yearn for his home or feels bound to the memories of the past; the feeling of nostalgia is global for him. Gorchakov loses himself in the unreachable beauty of times and places which will never again become his reality. 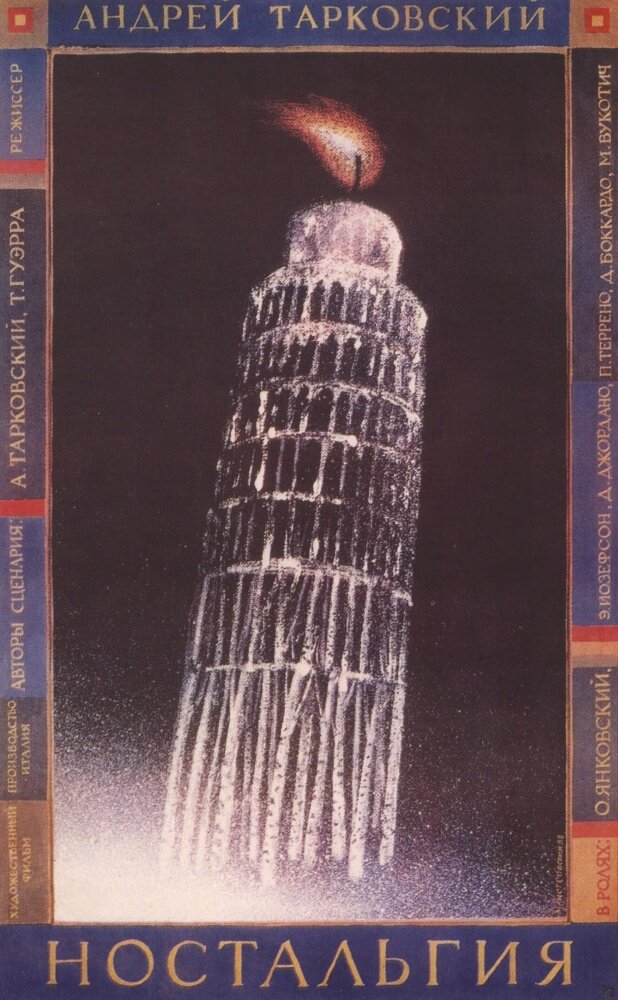 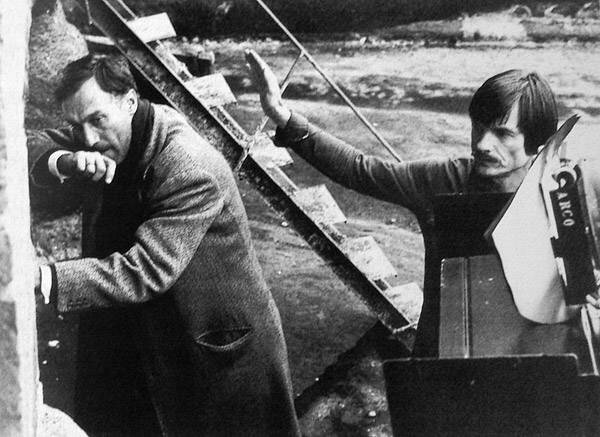 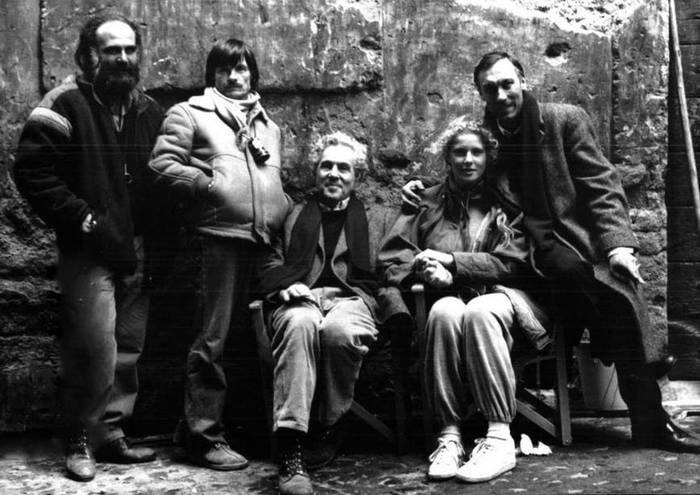 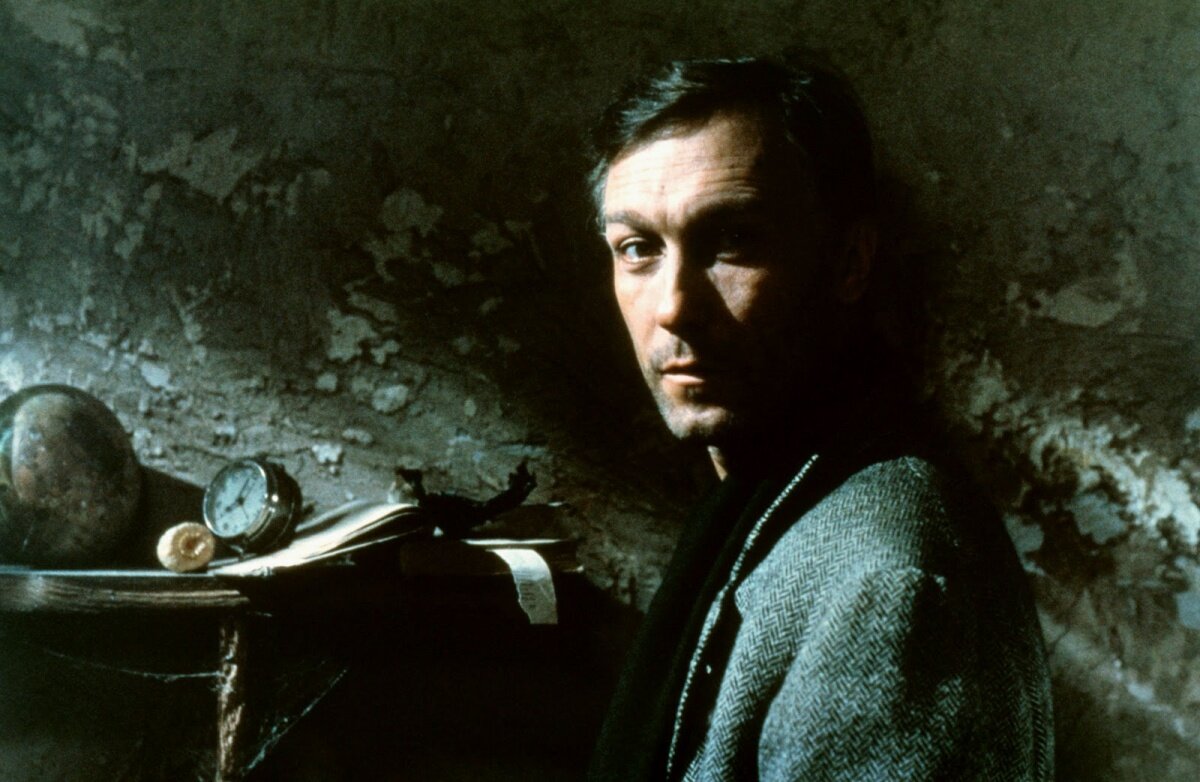 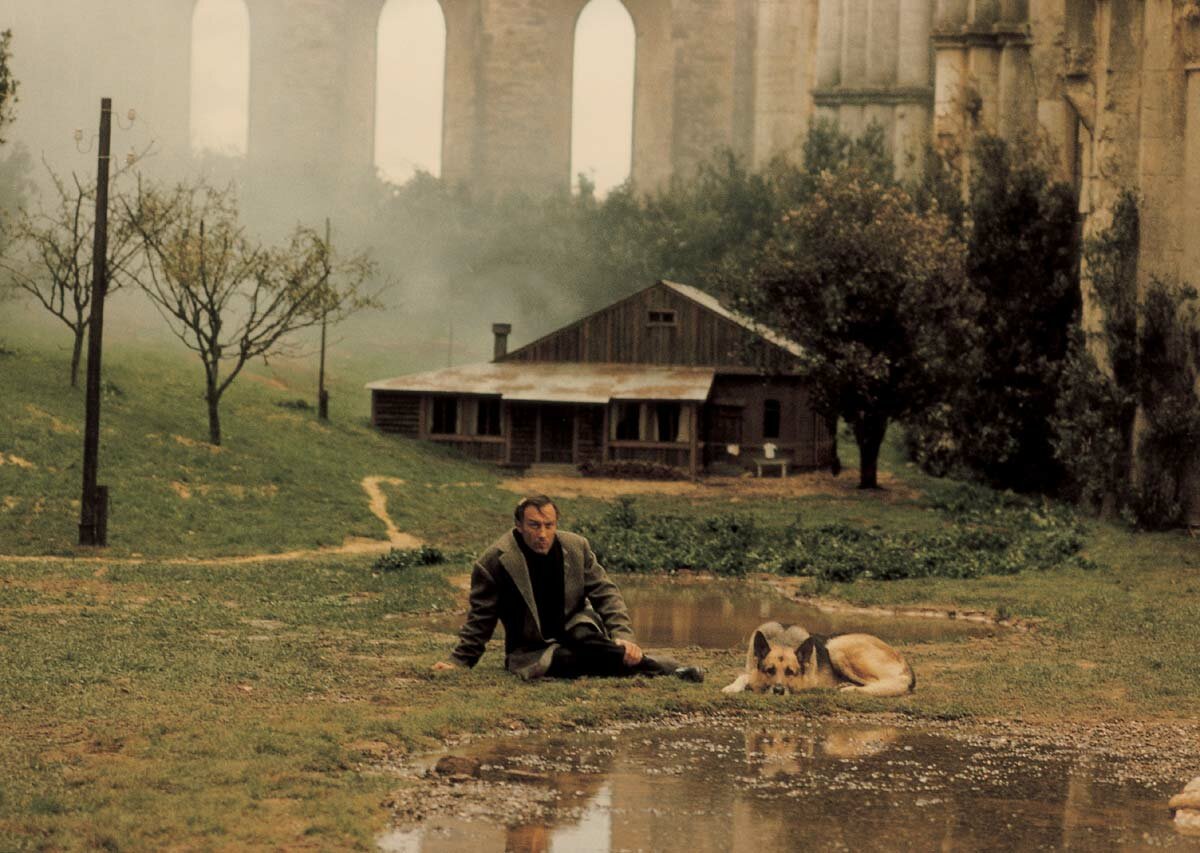 The audience is going through a very slow and sophisticated torture with Gorchakov. He is lost and emotionally drained by his helplessness and loneliness. It feels exceptionally clear due to technical work in the film: visuals, sound, frame composition — those are small parts which add up to a greater whole, and make it possible for the viewer to try to understand Gorchakov and his pain.

Nostalghia is dark. The palette is mostly gray, and those gloomy colors once again bring the audience to the realization that the feeling of nostalgia Tarkovsky is trying to show is very depressing in its nature.

The general audience is used to seeing the picture-perfect Tuscan countryside of Italy in cinematography. In Nostalghia, there are oddly empty streets and foggy landscapes which almost give the viewer a feeling of anxiety. It may feel disturbing until it becomes apparent that Nostalghia is not about being in Italy – it is about being away from home. And only such gloomy and unfriendly scenery shows how Gorchakov sees and perceives this place. He is indifferent to the beauty of Italian architecture and works of Renaissance artists. It is not because he cannot appreciate them. On the contrary, he is an intelligent man who feels such things very deeply. But the magnificent Italian landscapes are only valuable for him when he parallels them with the landscapes of his homeland. He is constantly in search of those similarities, and every time he does not find them he becomes more detached from reality. In his dreams he sees his old house in Russia, his wife and kids he left. While Gorchakov is wandering narrow Italian streets, his mind is far away, living a life which does not exist. His days in Italy are filled with emptiness and longing. The only way out from this state is to find a person who would truly understand him. Gorchakov is desperate to find a soulmate who could alleviate his sufferings. 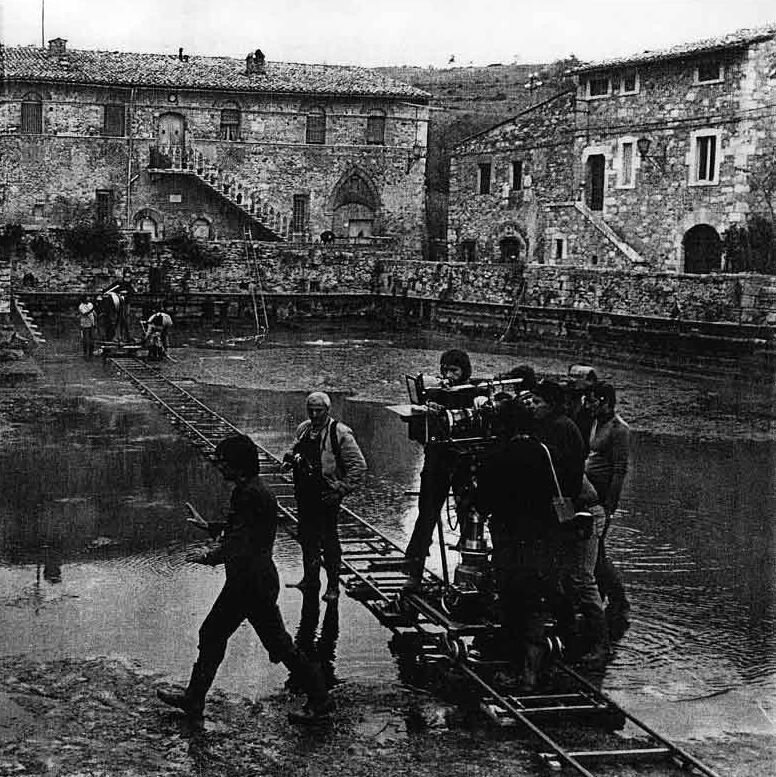 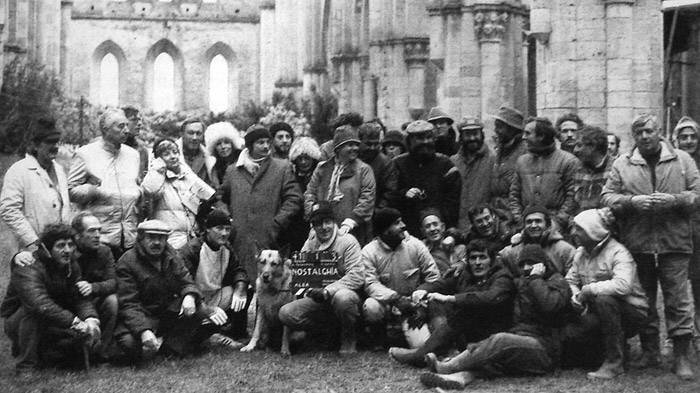 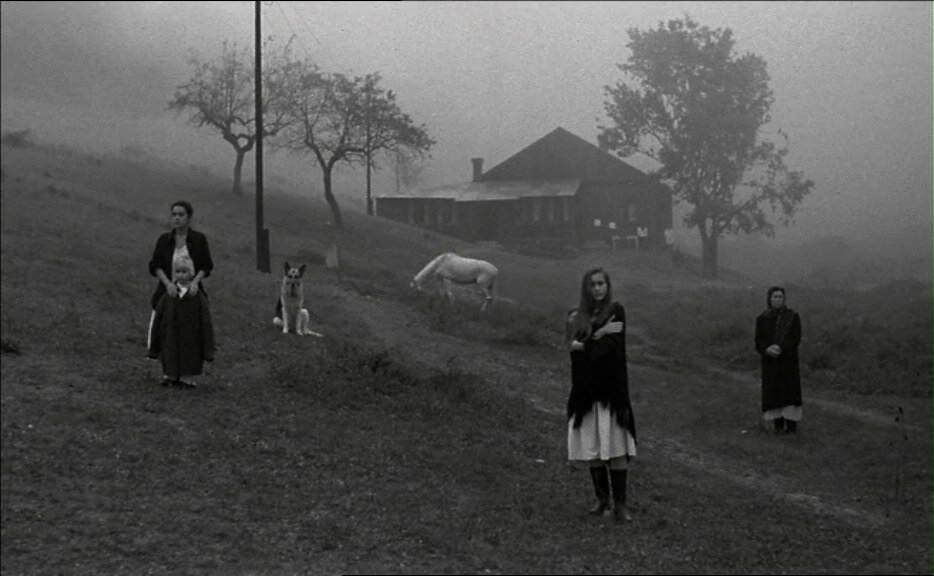 Nostalghia is in many ways about distances: both physical distances which separate us from our loved ones and emotional distances between people. Tarkovsky is sure that a person can not live a life of solitude, and all of us need communication. At the same time, he is saying that building close relationships is probably the most difficult thing to do for a person.

In the film, Gorchakov is trying to emotionally connect with his interpreter — Eugenia (Domiziana Giordano) — but the feelings are not even spoken out loud, and their love story is never finished. And there is no one to blame because they were people of two different worlds that were never meant to get close despite the time they spent together. Tarkovsky says that "Nostalghia is about the impossibility of people living together without really knowing one another, and about the problems arising from the necessity of getting to know one another." Relationships and communications between people are important, but there are some walls that simply cannot be broken. Some things, such as language, historical background, and cultural heritage exist as a part of our identity, and people of other cultures simply cannot appreciate it.

"We Russians claim to know Dante and Petrach, just as you Italians claim to know Pushkin, but this is really impossible — you have to be of the same nationality. The reproduction and distribution of culture is harmful to its essence and spreads only a superficial impression." — Tarkovsky almost says that people are doomed to not understand each other. The perception of another person is always false. Those thoughts Tarkovsky puts directly into the mouth of his protagonist. When Eugenia wants to discuss the Russian poems which she read in Italian, Gorchakov states that translation never carries the essence of a piece of writing. And despite his attraction to Eugenia, when she asks, "How can we get to know each other?", his answer is "By abolishing frontiers between states." Surely, he is aware that it is impossible, but feeling the physical separation from his homeland and his loved ones makes him think about it. What he does not realize is that such thoughts only push him to create artificial barriers which isolate him from physical reality. 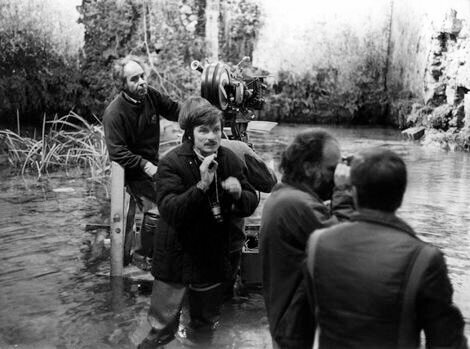 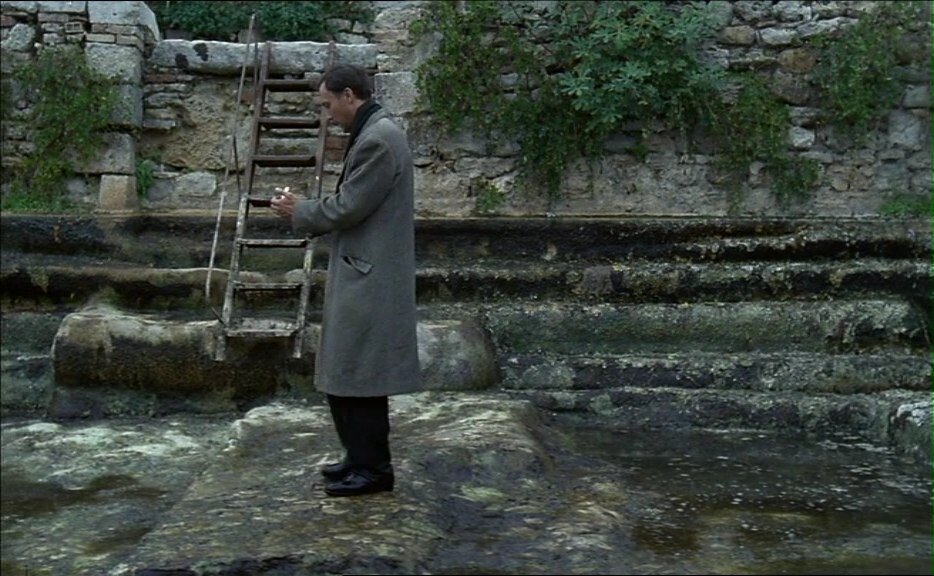 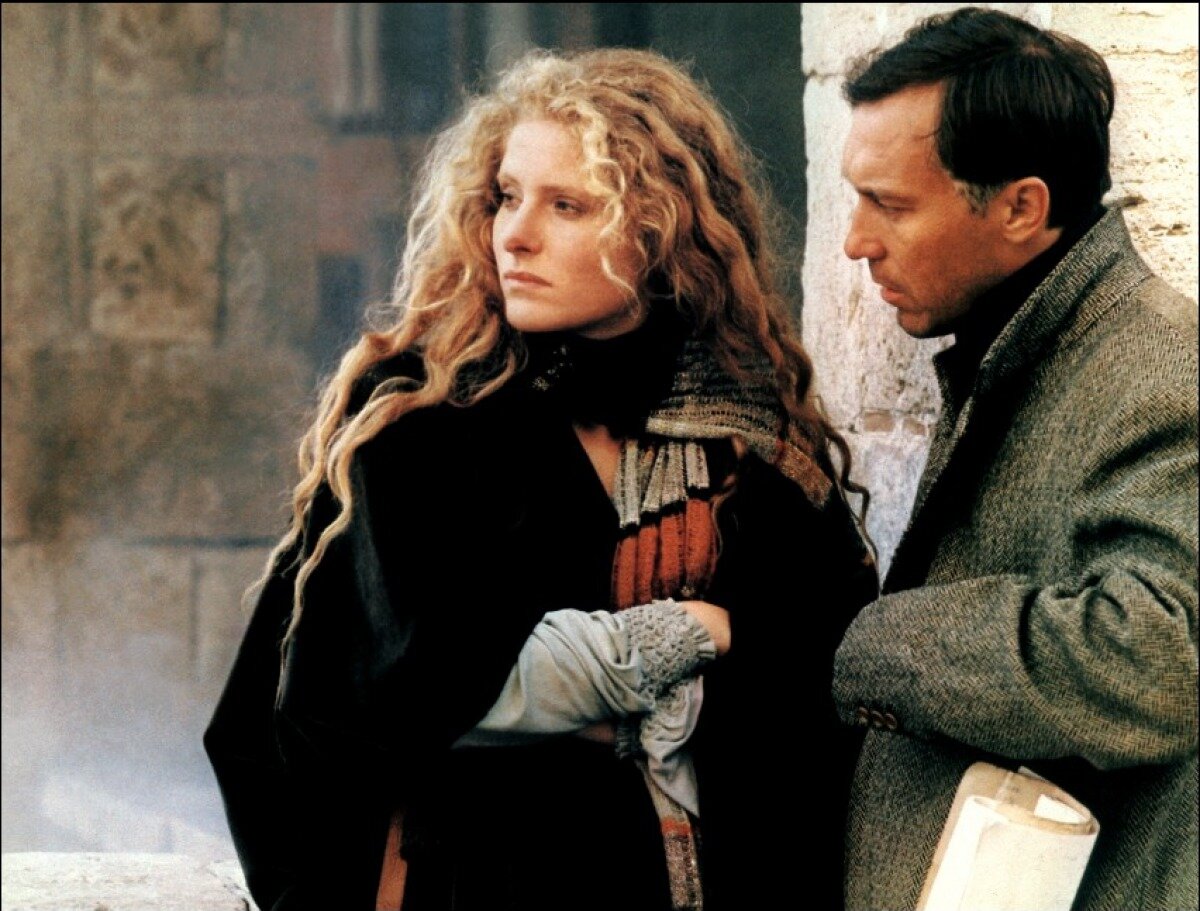 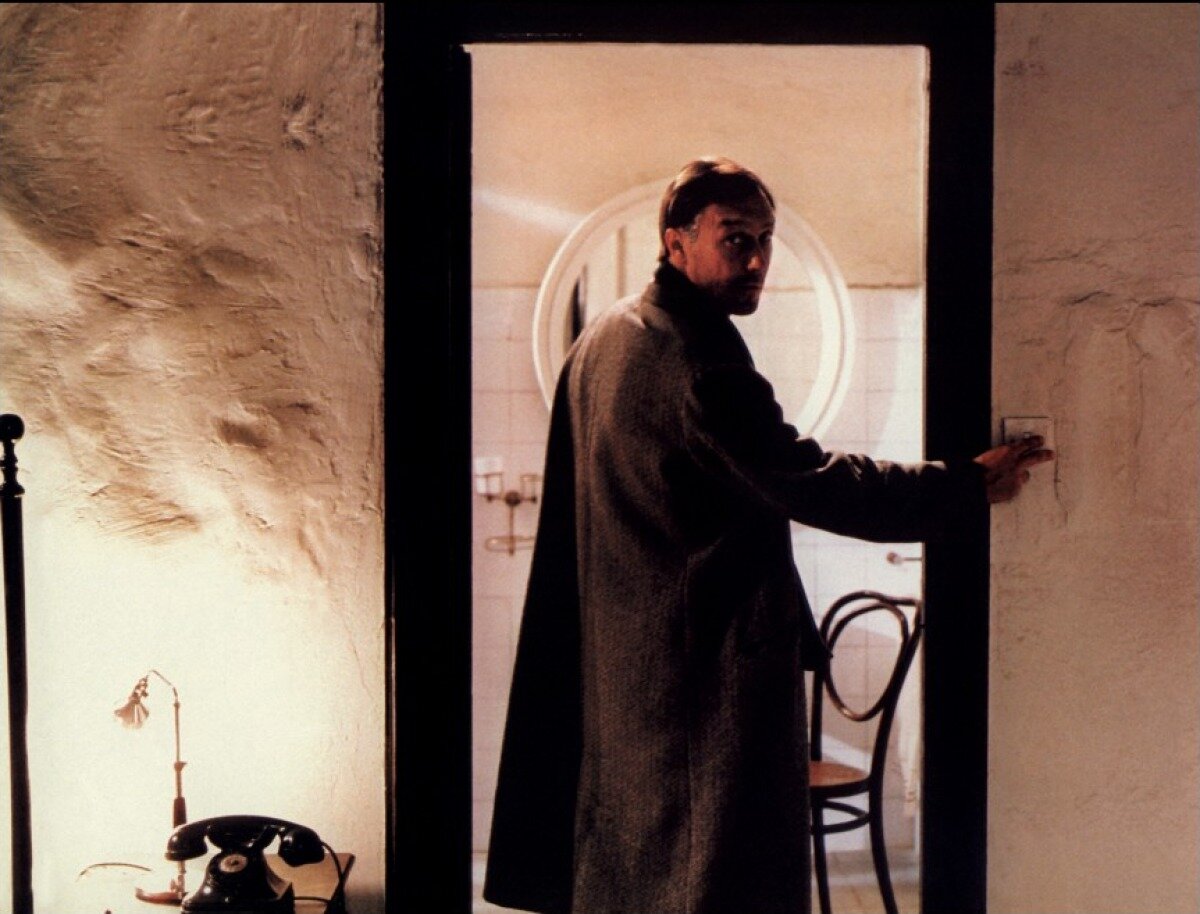 "In Russian, "nostalgia" is an illness, a life-threatening disease." Andrei Tarkovsky died in 1986 from cancer, only after two years of living abroad. His protagonist Andrei Gorchakov dies of a heart attack after carrying a lighted candle across the empty hot-spring baths — according to the local mystic, it was supposed to save the world.

Tarkovsky knew exactly what this devastating Russian nostalgia is and had the talent to make a film which would allow even a person who never felt homesickness to feel it. He wanted to talk about the unparalleled and unexplainable feeling of attachment Russians have to their national roots, their past, their culture, the places of origin.

Tarkovsky's son would later say in the interview, "Russians are very bad immigrants. They will never get used to their new surroundings, as these will never become their spiritual home." And this longing for spiritual home, so familiar to Tarkovsky and then reflected in Gorchakov, is what Nostalghia is truly about.
This year, the XVI Tarkovsky International Film Festival "Zerkalo" will be held from July 22 to 27.

- from July 22 - the competition program of the International Film Festival "Mirror" in the Tretyakov Gallery;
— from July 27 — for the first time on the big screen, Andrei Tarkovsky's iconic "Nostalgia" in 4K. Premiere in Moscow at the cinema "Art";
— from July 28 — a special program for the 90th anniversary of Tarkovsky and the 65th anniversary of the Strugatsky brothers in the United cinema network "Formula Cinema / Cinema Park".