Antlers – Whose Woods These Are?

This past Halloween, the world was gifted with a new psychological horror movie, interesting enough to check out at least for the star power of its creators: director Scott Cooper (Crazy Heart (2009), Black Mass (2015)) and producer Guillermo del Toro (The Shape of Water (2017)). Though the premise undoubtedly speaks for itself: Antlers (2021) is a story of a young boy trapped in the house with a sinister creature of First Nations mythology. The trailer heavily alludes to the mythological Native American origins of the monster and promises a gripping tale from the outset, opening with a monologue about storytelling. But what, if anything, does the movie really deliver?

12/11/2021
Cooper employs the story of wendigo, or windigo, a vengeful spirit inhabiting the myths of North American First Nations, as the core subject of his movie. Lucas, a frail and pale boy, finds himself in the middle of this supernatural attack when his drug addict father is taken by a mysterious illness and Lucas is left to fend for himself. He endures a strange banging on his doors at night which prevents him from sleeping; he is miserable, lonely, and quiet. The staff at school is indifferent. It soon becomes apparent that Antlers is blunt with its visual metaphors: the abused child is easily recognisable on screen not only by his physical state, but also by the world that surrounds him, ever-empty and silent. He walks along the train tracks, he wanders the forest, he locks the doors to the basement, all in suffocating loneliness. The inner world seeps into reality with Lucas's terror and pain spilling out on screen, and the fact is established very early on.

In case the audience is unused to unpacking the visual allusions, the movie introduces a teacher, Julia Meadows (Keri Russell) – a young woman recently returned to her hometown after twenty years of absence, and taking up a job at the local school. Julia is the one to recognize Lucas's pain and bring it up with the principal because she herself has felt that exact pain having been abused by her father; the whole ordeal is recounted during her conversation with her brother Paul (Jesse Plemons), a sheriff. The point is made: Julia seeks to help Lucas because she could not help Paul. The visual metaphors transition into a literal parallel of the two central characters – the teacher and her student.
"Once, there were three bears that lived in a dark and wet cave above a small town. Every day, Little Bear went to school, and at night he would come home and eat dinner. But one day, the little bear came home, and Big Bear and Baby Bear were different. Big Bear got sick and his insides turned black. Big Bear has become more angrier and meaner, because they had no food, no meat. But they had each other."
Circling back to the very essence of the plot, the movie artfully blends myth and trauma together, with wendigo taking over Lucas's father's body, and with Lucas telling a story that subverts the well-known Three Bears fairytale. Of course, myths are largely containers of generational and personal trauma within a given culture, be it the trauma of resettlement or displacement, hunger, or abuse; myths are stories that recount the experience without us needing to live through it for our ancestors have lived it for us before.

The crucial question to ask of the Antlers, then, is whose ancestors is it presenting? For a movie luring in the audience with the discussion of Indigenous storytelling, Antlers does very little to pay respects to it. The cast features Graham Greene, a native of Ontario's Six Nations Reserve (coincidentally, the only First Nations cast member), as a local native American by the name of Warren. Through his narration, the legend of wendigo is a simple scary story, the likes invented by lazy parents to warn their kids off a dangerous forest – the creature is cannibalistic and vengeful, and can be killed with a blow to its heart. But what are its motives? What is at the core of its primal rage? These sorts of questions never get asked. With the help of the Canadian Encyclopedia, a curious audience member could find out that in First Nations mythology, wendigo is first and foremost a guardian of community, a ward at the gates of culture. A generous reading of the script might suggest that a wendigo inhibiting a white American's body and devouring a couple of white kids in the process is exactly the function of the creature in the original myth, but the context clues, like an all-white cast, suggest a peculiar, almost hilarious paradox. In truth, it should be noted that the very central theme of the movie remains abuse and trauma of an individual boy, not a generational rethinking of white crimes. In a word, the Indigenous myth of a ward of community becomes a vessel for white trauma porn – a dubious adaptation of the original.

Indeed, Antlers does not only rely on the theme of abuse, the word repeated like a cruel mantra over the course of the movie by almost every character on screen. The body horror aspect of the plot is significant and fascinatingly disturbing, with the wendigo transforming the human form first into a skeleton bag, and then sprouting enormous antlers out of the body. The inhuman screams that follow the appearance of the creature are of note as well: the often piercing silence is effectively penetrated by terrifying wails. For a Halloween weekend release, the bare minimum checklist of conventionally horrifying details is complete. 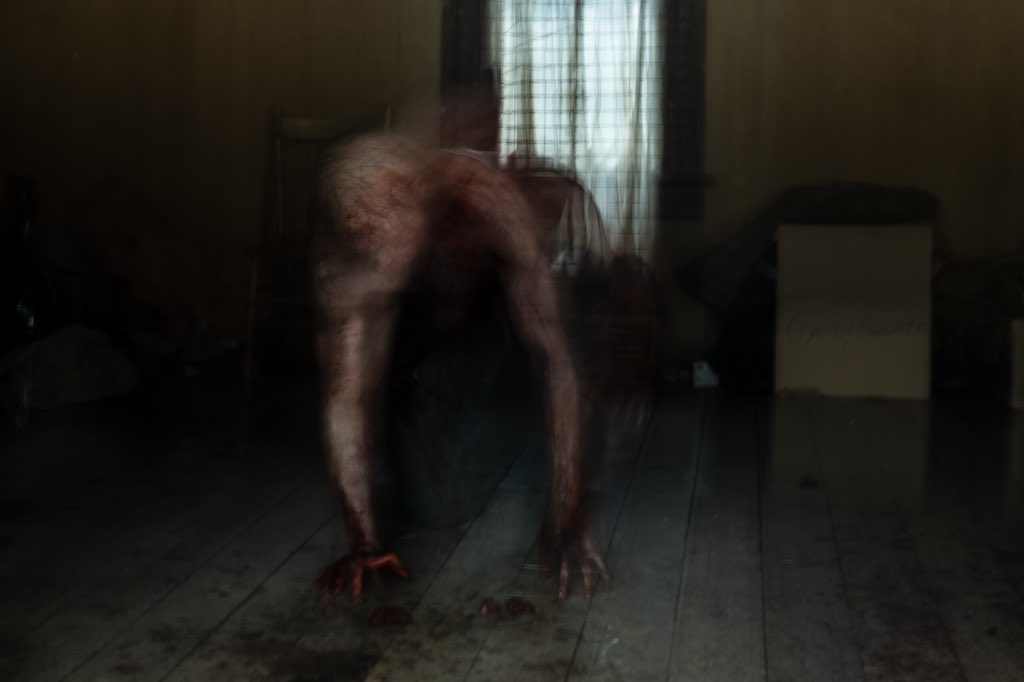 This is the story that Lucas tells as part of his school assignment. Julia introduces the children to the concept of myths and the process of storytelling, which "started with our Indigenous people," and Lucas illustrates his terrifying story with an equally gory drawing. This, too, Julia recognizes as a symptom of abuse and voices it to her brother and to the school principal. The principal checks out Lucas's house and gets eaten by the creatures that inhabit it – the ones that have been banging on the doors and keeping Lucas up at night, the ones that his father and brother had become.
What becomes a wendigo in Antlers is pointedly mysterious and nameless in The Quiet Boy. From the movie's mythological origin, mysterious spirits, unexplained motives of the monster, the short story shifts to the child in question and his trauma as seen through the eyes of his teacher, making the myth coming to life a possibility, but not necessarily a focal point of the story. The latter approach makes the story personal and very human, lively with its brief but accurate portrayal of the human psychological complexity. Antlers, in turn, puts up smoke and mirrors of an appropriated myth in a weak attempt to scare the audience with horrific monsters. I love body horror, but not on the bones of Indigenous cultures. 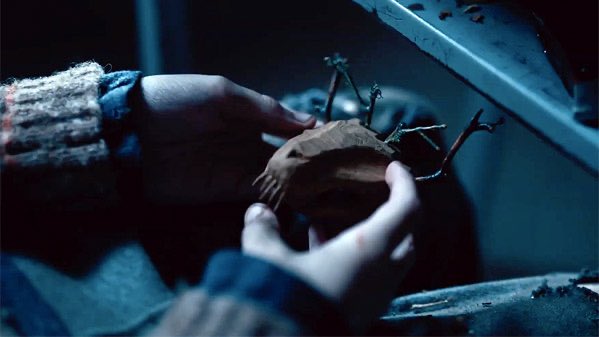 In all, Antlers is, undoubtedly, a gripping and visually impressive movie. The suspense is masterfully maintained, and what might be regarded as drawn out in a thriller or drama comes in handy in this psychological horror piece. The cast is impeccably talented and well-directed: sure, the dialogue is formulaic, but it is believable in its simplicity. It is in the script where the movie finds its undoing: in the hopes of luring the audience in with the promise of an exciting supernatural aspect instead of a vague allusion to it in the original short story, the movie loses the depth found in its straightforward source material. Antlers is a decent pick for a Halloween-themed movie club, or a night out with friends. A truthful First Nations myth representation should be sought elsewhere, and a curious allegory of abuse is better dealt with in the original short story.
Links to sources/extra material to check out:
The Windigo figure in the Canadian Encyclopedia
Windigo in the Great Lake region
Stories aboutCoyote a First Nations trickster that often seeks to satiate his hunger.
On the general topic of tricksters and hunger in mythology, Lewis Hyde's work is a great starting point.
It is not just the Indigenous myth that gets mangled over the course of the on-screen adaptation. Nick Antosca, a co-writer of the script, is actually the sole owner of the initial idea: the plot of Antlers came from The Quiet Boy, a short story he published in January of 2019. While the selling point of Antlers is its claim to a solemn and serious adaptation of an Indigenous myth, The Quiet Boy handles the very same story of a child's trauma projection with whimsical simplicity and, occasionally, even humour.
© 2020 – 2022 IN VISIBLE
© 2020 – 2022 IN VISIBLE
Made on