Don't Look Up — Screaming Passengers of the Earth

For an avid moviegoer, Adam McKay's name has long been synonymous with overt satire and black comedy. This American director revealed the dubious image of Dick Cheney for the whole world in Vice, explained the cause and consequences of the 2008 financial crisis in The Big Short and made the audience doubt family values with three seasons of Succession, one of the most successful HBO shows.

Now the moment has come when pretentiousness and fame have become an unprofitable commodity for McKay. The inflated expectations for his new film Don't Look Up (2021) have been crushed on the rocks of ambition for many viewers. How did the director anger half of the audience and inspire the other? Let's figure it out. But before that, we will announce that we are exactly in the middle of this clash — the arguments of the opponents are quite strong, as is the author's admiration for McKay's work in general.

21/12/2022
RUS VERSION
The film is quite far from a New Year's one but it was released right before the year changed into another — which is symbolic, given the theme of "rebirth" in the plot. The film features a large and deadly comet coming straight for the Pacific Ocean, and no one can hide from the consequences of this fall. The earth will be destroyed, but no one on the planet cares about it — except for a group of scientists who discovered the threat. They will become the conscience of humanity, whilst the latter gets to enjoy the last drops of pleasure. Careless people follow celebrity relationships, strive to win the presidential race and hope to keep their business afloat, paradoxically, with the help of the comet.
There is a lot of illogicality in the film — in form, not in content — that only emphasizes the absolute absurdity of the modern world. McKay adds spectacular postmodernist features which are inherent in many of his works: one-second documentary frames, animated shots and images of the World Wide Web. The latter, however, looks out of place, as if the director is completely unfamiliar with this digital world.

It is much easier to find flaws in the content of the film as well. This is not the first time when McKay broadcasts his thoughts about this complex topic: in his personal life, he began exploring ways to help the planet four years ago. Since then, the director has switched to an electric car, refused to eat red meat and tried to minimize his carbon footprint. However, the efforts of one, albeit influential person will not solve such a problem, especially in a world where people have forgotten how to hear each other. 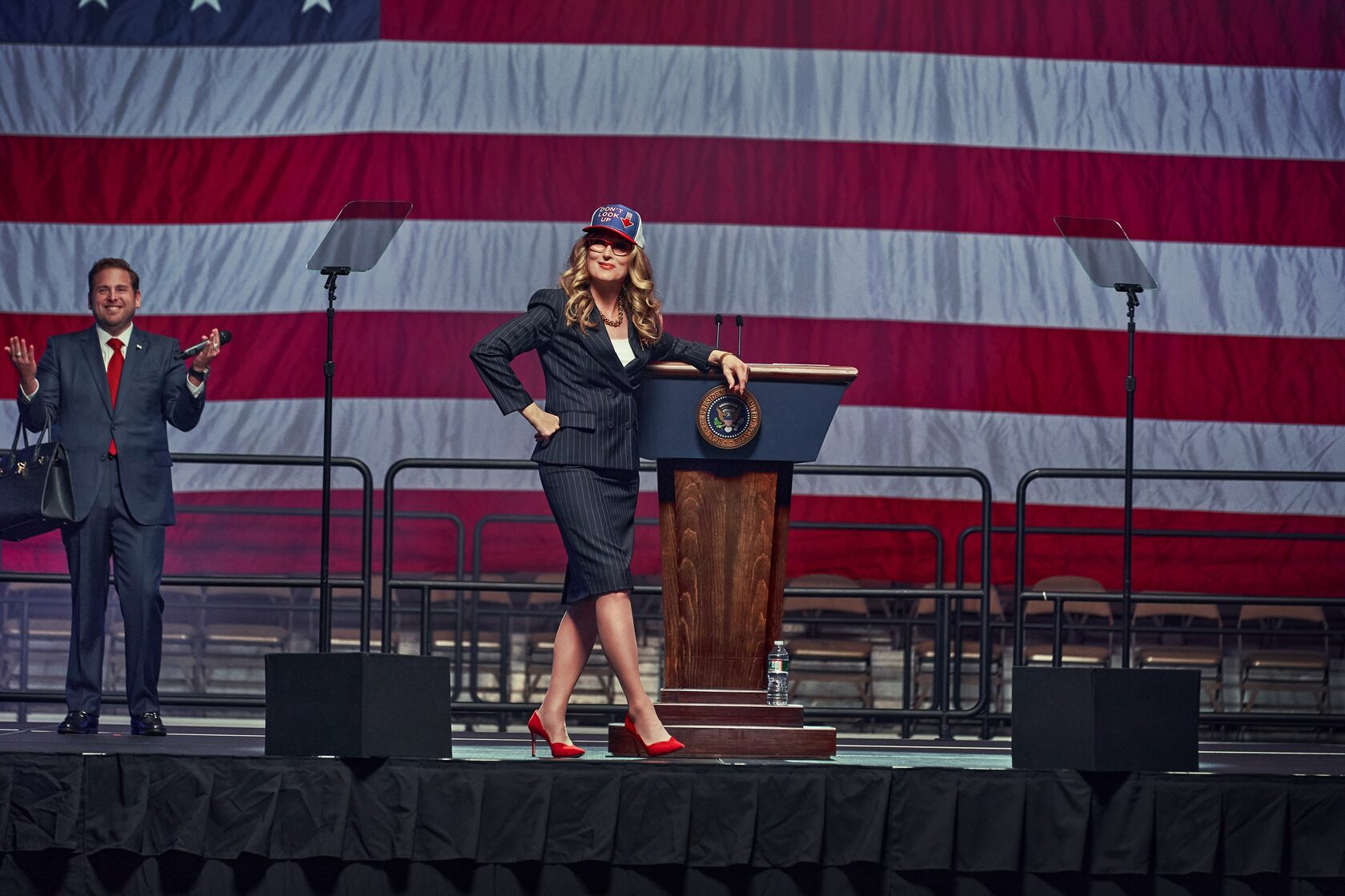 "When Covid hit, I realized it really was about how much we've fouled the means of communication, and how monetising the very way we talk to each other could be the end of us,"

says McKay.
The director came up with a specific message for the audience, nevertheless there are too many ideas for one film. The first misfire consists of McKay not saying anything previously unknown, not including any of the latest research that needs to be broadcasted through such a large media as cinema. Nothing about what needs to be done, except to notify the inhabitants of the Earth about it. He only gives an impulse for the snowball to roll, but familiar truths were already sticking to it: "we must act together", "rich selfish people will kill us", "someday we will all die", and so on.

This desire to speak out about such a topic right away destroys the precise creation. As the former screenwriter of the satirical show Saturday Night Live, McKay has an impressive baggage of comedic and dramatic tools, thanks to which he is able to speak sharply and to the point about the world and its processes. Unfortunately, the thin material could not withstand the load this time — according to many critics, it was the director's worst performance.
For example, McKay covertly incorporates the idea of the deceitfulness of politicians and businessmen into the film. In one scene, the head of BASH Peter Isherwell (Mark Rylance) tells the Council about his plan to crumble the comet — it will allow the use of metals in its composition for the development of the mobile industry. The technological genius covers up this mercantile outrage with a big pink bow that he calls "increasing jobs". The social package goes straight to the homes of Americans who are now ready to close their eyes to the destruction risk of 99.8%, just to get out of debt. It could have been a wonderful scene if commercial exploitation of the situation was not the most obvious plot twist.

The director also managed to speak out about a psychotic obsession with conspiracy. Randall Mindy (Leonardo DiCaprio) returns home after an unsuccessful visit to the White House and responds on his website to the posts of slacktivists. What they answered to Mindy's witty statement about the role of scientists, we will never know — the FBI came after the character. However, this topic is being developed further. After another disclosure of state secrets, Kate Dibiaski (Jennifer Lawrence), the most relentless representative of the astronomical group, dropped the phrase: "They're not even smart enough to be as evil as you're giving them credit for". 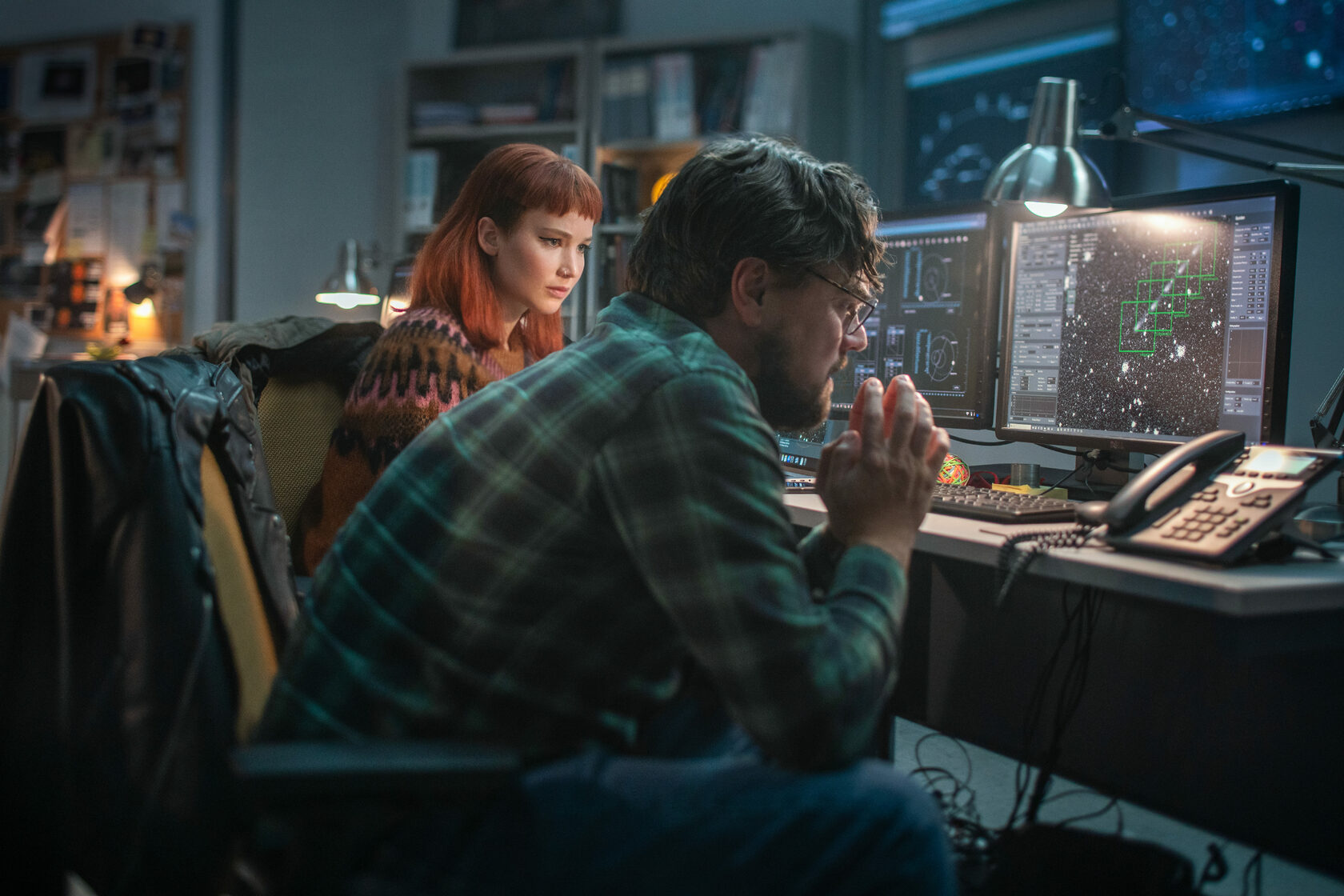 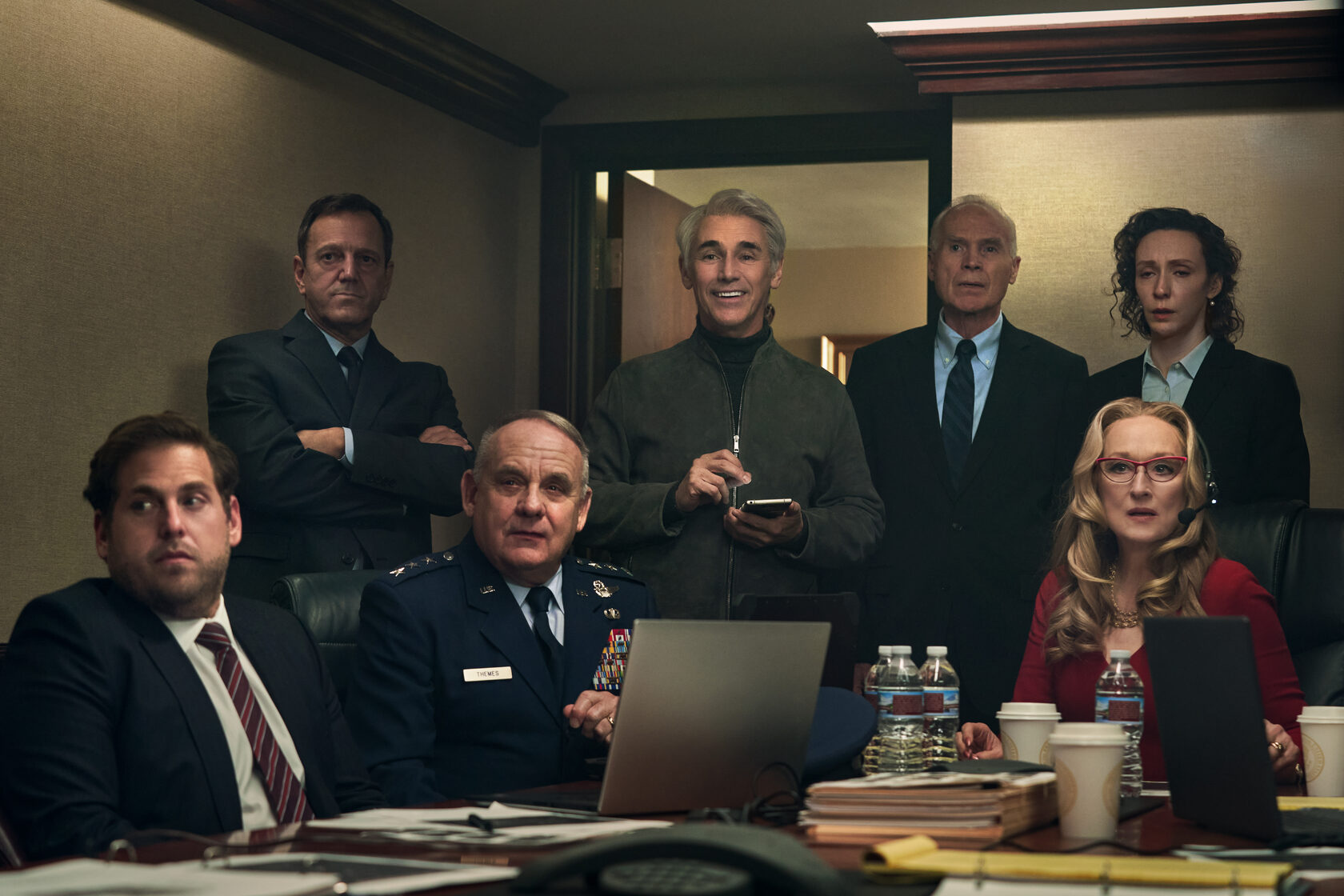 McKay also throws an elusive reference to cancel culture. In the dialogue between Brie and Jack on The Daily Rip, there are the following phrases about a wrongly-convicted celebrity who participates in a Celebrity Dance Off: "I thought she would've won." — "I still think she's guilty."

It is impossible to pass by the excessive cartoonishness of the characters. At a children's show with muppets Randall eventually shouts "We're all going to die!" — and it doesn't look like a coincidence. Wait a little longer, and steam will come out of their ears. Both Dibiasi and Mindy became memes quite quickly that proves the inadequacy of the collective reaction to the changes in the world once again. This cultural phenomenon can be called the natural course of events as much as you like, but one thing is worth recognizing unequivocally — within the framework of the film, memes distract society from the negativity that needs to be accepted. 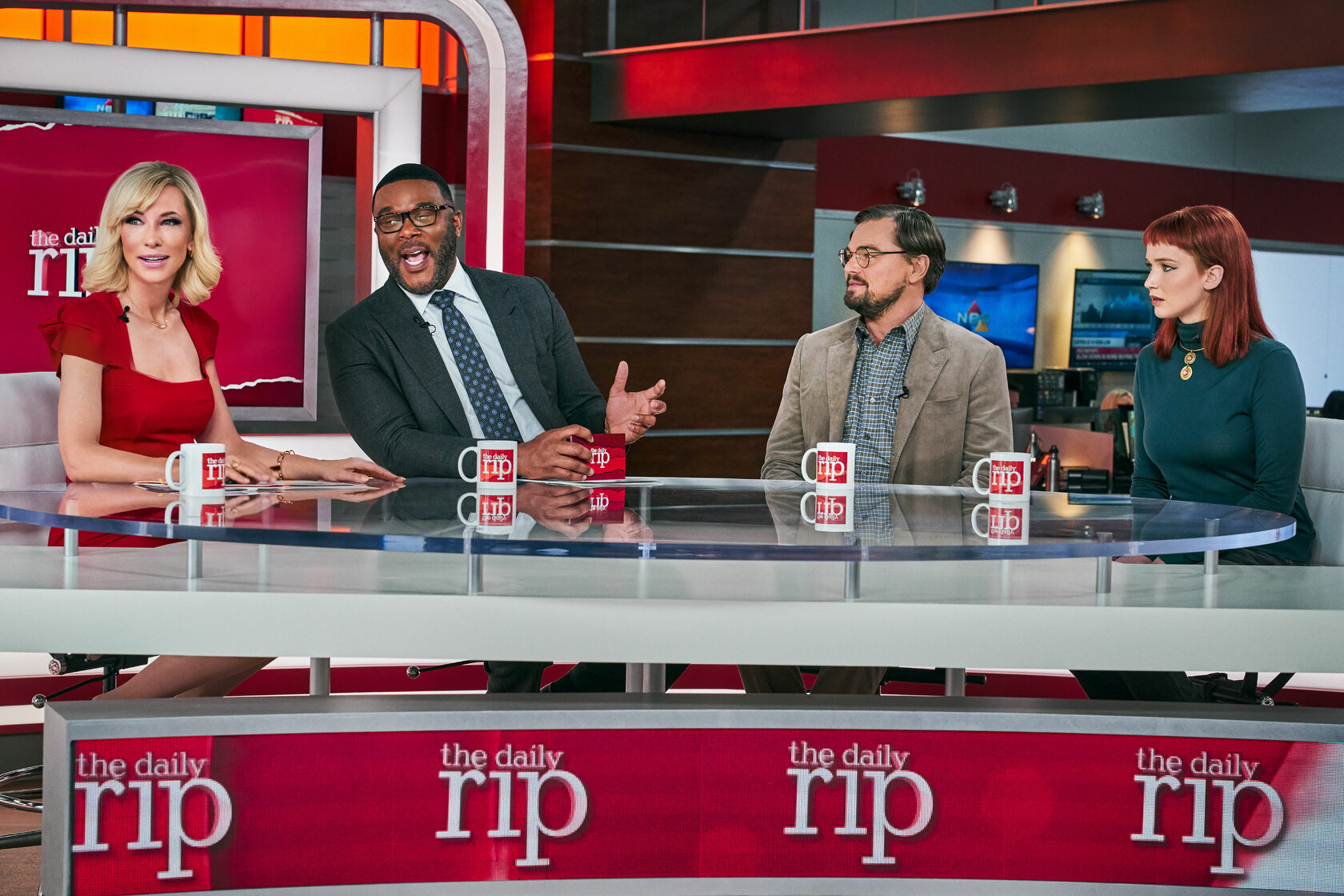 Meanwhile evil rubs its hands contentedly. To be noted — the antagonist is not a comet threatening the Earth with complete destruction. "They have all the power" is a simple phrase referring to politicians and technological geniuses, and it suddenly becomes the main idea of the film. Nonetheless, McKay's exaggerated satirical reality is in serious opposition with our understanding of the authorities' actions. The characters he brought to life seem so detached from life that fear creeps under the skin. In this regard, the epigraph perfectly reflects the content of the film: "I want to die peacefully in my sleep like my grandfather, not screaming in terror like his passengers." 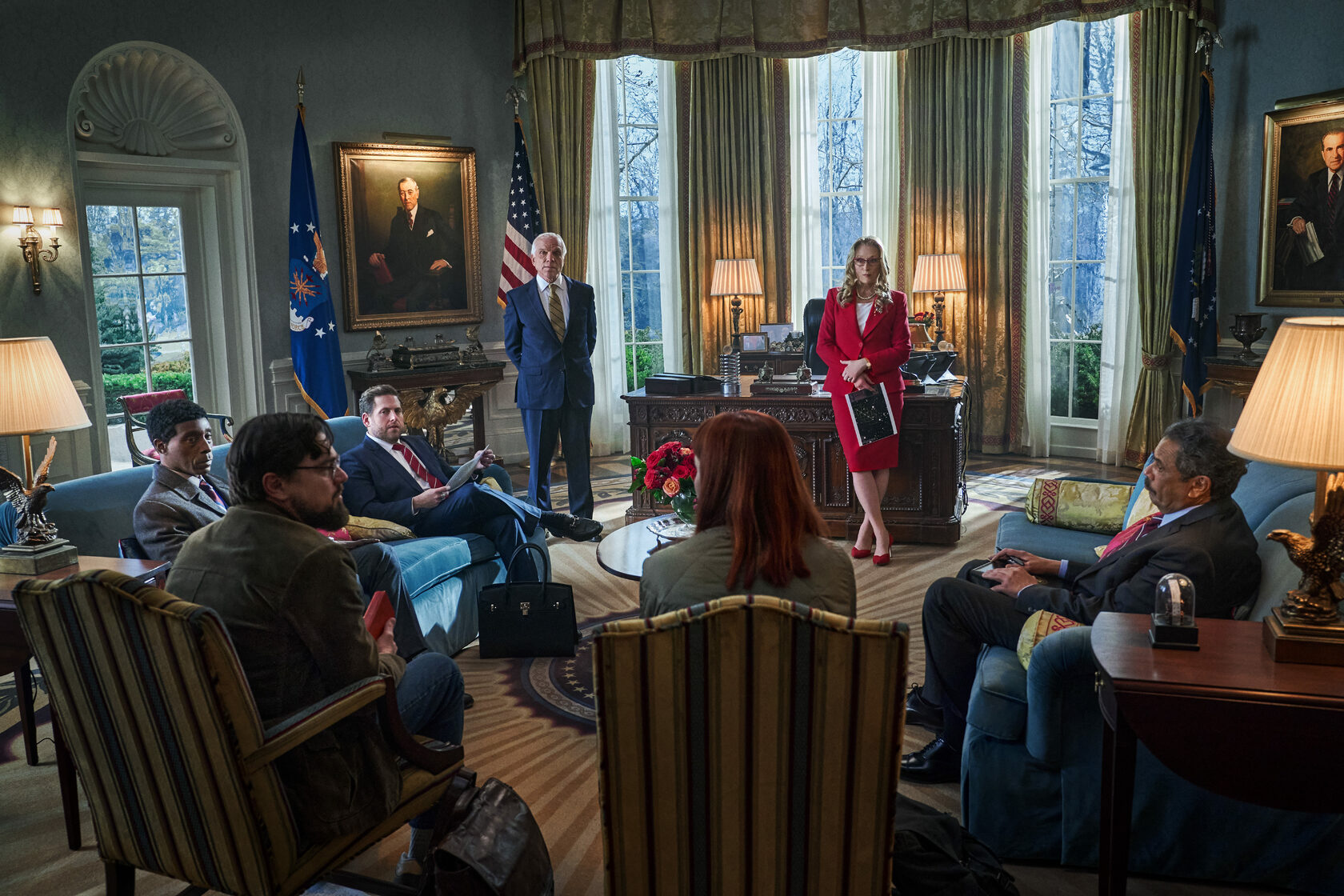